Twelve years ago, at a conference at St. James’s Palace, Prince Charles told an audience he “felt proud” to have been called “the enemy of the Enlightenment”.

Revisiting traditional thinking before about 1650 clearly appealed to the heir to the throne – going back to a time when Locke, Voltaire, Descartes and Hume did not embrace reason over traditional practices.

The belief that the ‘order of nature’ should be more trusted than science and evidence underscores the Prince of Wales’ foray into the world of medicine, claims Professor Edzard Ernst MD, in a new book, “Charles, The Alternative Prince – An Unauthorized Biography”.

Ernst explained to United Kingdom“I have dedicated my professional life for the past 30 years to research into alternative medicine. Prince Charles is probably the most vocal advocate of this part of health care in the world, so for me it was a very obvious choice.”

The author argues that instead of building on his privileged position and achieving a personal vision of integrating conventional and alternative medicine, the Prince “pursued a largely anti-scientific agenda and promoted the uncritical integration of unproven treatments into the NHS”, with the result that “it has become an obstacle to progress in healthcare and has done more harm than good”.

The omens were not good when, newly elected short-lived president of the British Medical Association for his 150and anniversary, the Prince of Wales came not to praise the assembled medical luminaries with “customary niceties”, but to launch “an all-out frontal attack”, says Ernst, in which he told them that “everyone imposing edifice of modern medicine, for all its breathtaking success, is like the famous tower of Pisa, unbalanced”.

Rather than persuade his audience of the benefits of integrating alternative and modern medicine, his speech had the opposite effect. “Being taught like first-year medical students by a young man who was obviously uninformed could hardly amuse seasoned doctors,” Ernst comments.

“Charles’ explosion therefore risked taking a counterproductive step backwards by reinforcing barriers that had all but disappeared,” he wrote. “The slur caused a reluctance in the British medical establishment to look sympathetically at alternative medicine.”

It should be noted that the author of “Charles, the Alternative Prince” has a long history of public disagreement with the prince’s views on integrative medicine. In fact, he holds Charles responsible for undermining his position at Exeter, which led to his early retirement.

The spat dates back to 2005 when Charles personally tasked former Barclays Bank chief economic adviser Christopher Smallwood with looking into the effectiveness of certain complementary therapies in a bid to persuade the government to come up with more on the NHS . 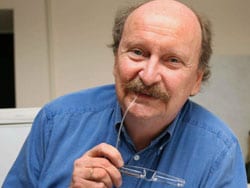 The report, which has never been peer-reviewed, concluded there was sufficient evidence that some complementary therapies might be more effective than conventional approaches in treating some conditions, and called for peer review. the NICE.

Ernst was made aware of the draft document which he said contained “numerous serious errors”. He then argued that Charles “may have overstepped the bounds of his constitutional role in trying to influence UK health policy”.

Write in the British Journal of General Medicine in 2006, Ernst said of the Smallwood report: “It feels like its conclusions were written before the authors looked for evidence that might match them.”

A formal complaint from Charles’s first private secretary to the University of Exeter “alleging that I had breached confidentiality rules, led to the closure of my research unit”, according to Ernst.

Is Ernst’s book recovery time for Charles and those around him? “No, that’s one of the main reasons why I hesitated for years to write this book, so that it could be seen as an act of revenge for what happened then,” he says. . “I think anyone who reads the book will realize that I mention those two or three unpleasant encounters with Prince Charles and his followers for the sake of completeness.”

Ernst was by no means the only critic of the Smallwood Report. In a letter to The Guardian, Dr. Richard Horton, Editor-in-Chief of The Lancet, wrote: “We are losing our grip on a rational scientific medicine which has brought benefits to millions, and which is now being eroded by the complicity of doctors who should know better and a prince who seems to know nothing about the all.”

Royal intuition versus the rational brain

The book explains how the Prince of Wales developed his views on alternative medicine, focusing on the influential role played by South African-born writer Sir Laurens van der Post.

Ernst tells us that “as a young man, he fell under the spell of van der Post who introduced him to very strange ideas: mystical thought, Jung and psychoanalysis, etc, etc, and which put him on the way to follow his intuition, rather than his rational brain”.

In the book, he writes: “Charles was looking for the meaning of life and Laurens was good at providing him with a ‘missing dimension’. Ernst argues that “Charles’ degree in the arts left him ill-equipped to understand science or medicine, Laurens convinced him that his royal intuitions came ‘from a source far deeper than conscious thought'”.

The author points out that van der Post’s reputation imploded after his death. His biographer, JDF Jones, describes him as a “compulsive fantasist” whose “ability to present a false image to others is coupled with a tendency to overestimate his own abilities”.

We also learn that the Royal Family have long believed in homeopathy since the 1830s, culminating in the appointment of Prince Charles as Patron of the Faculty of Homeopathy in 2019.

A Report of the House of Commons Science and Technology Committee in 2010 concluded that homeopathic remedies were no more effective than placebos.

In 2017, NHS England said it would no longer fund homeopathy on the NHS because the lack of evidence of its effectiveness did not justify the cost. The decision was backed by a High Court judgment in 2018.

For Professor Ernst, this decision was further proof that success in promoting alternative medicine had eluded him. “When Charles first sided with homeopathy, the UK had five NHS homeopathic hospitals; today there are none with that name,” he says. While the prince’s attempts to secure statutory regulatory status for Britain’s homeopaths, herbalists and acupuncturists have failed, so has his vision for a model hospital of integrated medicine.

Among other themes of the book, it analyzes Charles’ promotion of osteopathy and chiropractic, herbal medicine, Gerson therapy and the Foundation for Integrated Health, created to promote the views of the prince, and which was replaced by the College of Medicine.

For Ernst, “Charles acts on his intuition, his beliefs, his convictions” and “seems totally immune to evidence that does not confirm his credo. In this, he can become a real enemy of the age of reason”.

“He has no skill in science or medicine and only takes advice from people who are of his opinion in the first place.”

It concludes, “When Charles contradicts the consensus, when he uses his influence to interfere with our health care, and when he claims his opinion amounts to evidence, he stands in the way of progress.”

What will happen when the oldest Prince of Wales becomes king?

“He answered that question himself,” Ernst tells us. “He was asked if he would continue to lobby, and he said ‘definitely not, I’m not that stupid’.”

He adds: “I suspect that visibly it will stop, and secretly it will continue.”

“Charles, The Alternative Prince” is published on February 1, 2022 by Imprint Academic.

By Oluwafunke Ishola The Lagos State Government, through its Traditional Medicine Board (LSTMB), has declared that it will terminate the business of unregistered Complementary and Alternative Medicine (CAM) practitioners from here March. Mr. Olorunkemi Kadiku, Registrar of LSTMB, made the revelation in a statement signed by Mr. Segun Ogunleye, Public Affairs Officer of the council, […]

CU Pharmacy Alumnus have built a legacy in alternative medicine

Longtime friend and supporter Henry Leopold Strauss, 93, died peacefully on April 8, 2021 at the home where he had lived for 60 years. Strauss, RPh ’51 leaves a lasting legacy with the University and Colorado and the Skaggs School of Pharmacy and Pharmaceutical Sciences, his alma mater.